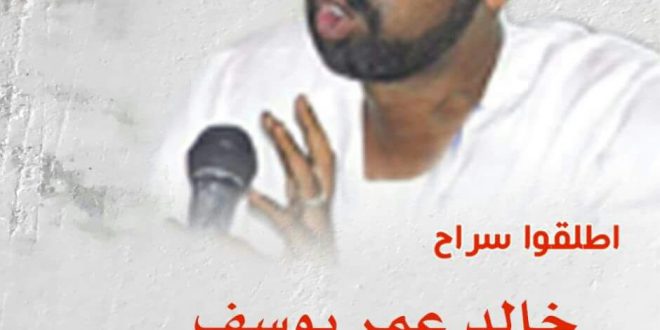 The National Intelligence and Security Services (NISS) launched an arrest campaign following public resistance to the decisions announced by the Council of Minsters in the evening of Thursday Nov 3rd.
On Friday November 4th, at 16:00, a force from NISS arrested Mr. Khalid Omer Yousif, 37 years old, the deputy of the Sudan Congress party (SCP). A force of five NISS personnel in a car stopped him near his house while he was driving his daughters, NISS force stopped the car and asked Khalid to come with them, they took the car keys as well as his phone and drove his daughters home. His whereabouts remain unknown.
Mr. Yousif had delivered a public talk in Al Deim area in Khartoum earlier that day.

The SCP will continue its peaceful resistance against the increasing repression of the regime. The arrest of the party leadership will not silence our voices, SCP will continue working with all forces of change to fight for our right as Sudanese to live a dignified life.

In the evening of Thursday Nov 3rd, The Government of Sudan announced a set of economic measures included increasing the prices of petrol, electericity tariff and other basic commodities amidst already harsh living conditions and a continuing war that the regime continues to accelerate in the absence of any political will to end the wars. The Government’s economic measures were announced after less than a month from its “National Dialogue” which have failed to bring about any change to the political situation.

The government previously announced a set of austerity measures in 2012 and 2013, that have led to mass protests at the time. In 2013, NISS launched mass arrests campaigns where activists where kept for more than 30 days and were subjected to torture as well as the killings of over 180 protestors in 2013 with no judicial processes to bring the killers to justice till now.