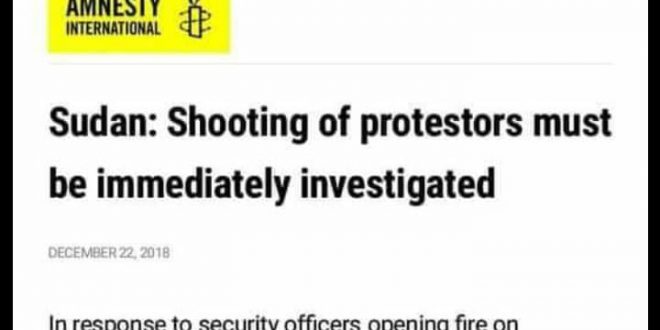 ·         As a result of the acute economic and political crisis that affected millions of deprived Sudanese, a new social group is actively involved in demanding their economic and political rights through peaceful demonstrations, which is qualitatively different from what has taken place in the last three decades.

·         The dictatorship is bankrupt and weak and the regime is on the verge of collapse through massive, sustainable, peaceful pressure.

·         The regime’s security agencies used live bullets against peaceful demonstrators, especially in Attubra, Gadarif, Khartoum, and other places.  More than 30 civilians were killed and tens are wounded.  This great, peaceful, mass movement raised the aspirations of the Sudanese people to achieve a genuine peace, democratic transformation, and a new social political dispensation.

·         The internet and social media have been closed down in Sudan in order for the regime to continue its killing of the innocent peaceful demonstrators away from the eyes and ears of the outside world.

·         The people of Sudan are being left alone.  There is almost complete silence with the exception of a few voices speaking out against the dictatorship’s killing of the peaceful demonstrators and civilians.

·         This painful silence will encourage the brutal Sudan regime, headed by the genocidal president who is wanted by the ICC, especially in the coming critical three days.

·         Yesterday in Khartoum, an important meeting between the two largest opposition groups, the Sudan Call and the National Consensus, has taken place and there is a full agreement to support and lead the peaceful mass demonstrations, to develop its agenda and plans, and to provide leadership together with civil society, women, youth and student groups.  This is a qualitative change in the interests of the peaceful mass movement.

·         On the 25th of December, all Sudanese professionals are set to have a mass peaceful demonstration at the premises of the government parliament, demanding total change and a new social and political dispensation.  The regime is expected to use disproportional force and to continue targeting and killing peaceful demonstrators.

·         We appeal to the friends of Sudan, human rights organizations, the U.S. Congress, the European Parliament, the Canadian and British Parliaments, the UN Human Rights Council, the African Union, international governments and the Special Envoys, especially the TROIKA, France and Germany, to speak out as silence is encouraging the Sudan regime to commit more crimes.  It is critical to stop the killing of the people of Sudan and to recognize their right to change.

·         The Sudanese people are optimistic and at long last, they have seen a light at the end of the tunnel to end wars, bring democracy and the rule of law, and to get free from a brutal system headed by the only current African president wanted by the ICC.  This noble cause should be supported.