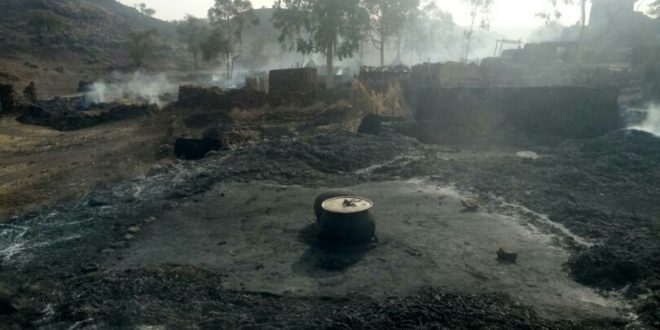 Khartoum’s forces and paratroops Janjaweed and Rapid Support Forces (RSF) militias continued its scorched-earth policy in and around Jebel Marra, unabatedly for consecutive two days. However, the government of the National Congress Party (NCP) had vowed to depopulate Darfur in general and the Jebel Marra in particular from its indigenous  tribes of African origin and forcibly replace them with Janjaweed militias, mercenaries and hirelings brought from Chad, Mali, Mauritania, Niger and Central Africa Republic.  On 19th of April 2018, Khartoum-supported Janjaweed militias stormed and burned to ashes the villages of Bule and Arrwa in western Jebel Marra, plundering, burning and massive destruction to villages continued on the 20th of April to include villages of solo, Dardoro, Fatta Kirrnya, Karri, Kaaya, Hilat Uoo Moya, Kanyore, Dar Al-aman, Marri, O- Gharib, Katta, Hilat Uoo Abdu and Kaara located to North West of Jebel Marra plateau As a result more than 30,000 civilians were displaced, mostly to the top hills, low lands and caves of Jebel Marra, in very miserable situation without any means of survival and shelter. Therefore, the Sudan Liberation Movement implore the regional and international community to meet their historic responsibility and do their utmost to stop the ongoing state-sponsored genocide in Darfur, we further appeal the world community to put pressure on Khartoum to allow immediate and unfettered access to all international relief and humanitarian organizations used to deliver food, medicine and humanitarian assistance to the genocide survivors of Darfur and the war-torn regions of Nuba Mountain and the Blue Nile.

Previous ?An Urgent Appeal from Sudan Liberation Movement to the UN, US, EU and AU
Next *NUP calls for transitional national government*