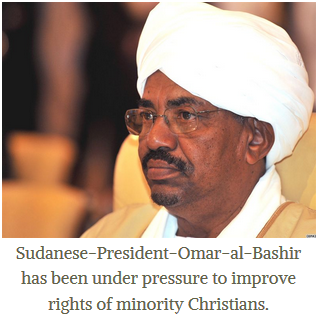 Among those detained by security officials this month are two pastors of the Sudan Church of Christ (SCOC), Christians confirmed. The pastors, who were taken from their homes in North Khartoum early December 18, have been identified as Kowa Shamaal, the SCOC head of missions, and Hassan Abdelrahim, a SCOC vice moderator.Their arrest came just days after Christian activist Talahon (Tilal) Nigosi Kassa Ratta, a member of an Evangelical church, was detained, Christians said.Security officials allegedly ransacked his home, confiscating a laptop and mobile phone. He was reportedly instructed to collect his phone the following day, but upon his arrival, the activist was detained. Authorities have not yet brought any formal charges against the Christian.These were no isolated incidents: Two weeks earlier officials detained Elshikh Kadoud, a Muslim man who read the Bible on his own and converted to Christianity, Christians said. The man was apparently charged with “apostasy” after his own father reported the case against him to Sudanese authorities.TRIAL STARTING?He was believed to be held held in a Khartoum prison, but officials reportedly said they do not know his whereabouts. His trial was expected to start on December 29.Christian rights activists say the new wave of arrests are part of a devastating year for churches in Sudan. Besides the arrests, at least three church buildings were demolished in October alone.2015 saw “church demolitions and burnings, arbitrary arrests, and land grabs the state has perpetrated against Christians in a country that both protects religious freedom in its constitution under law, but imposes Islamic sharia law and subjugates religious minorities in practice,” noted International ChristianConcern (ICC), a major advocacy group.“President Omar al-Bashir’s government maintains a deplorable history persecuting Christians, especially since South Sudan seceded in 2011,” ICC added in a statement obtained by BosNewsLife.Sometimes international pressure leads to the release of Christians, including Christian mother Mariam Ibraheem and Pastors Michael and Peter, who faced imprisonment and a possible death sentence for their Christian activities. Yet, “these latest developments prove just how much work remains to be done”, said the American Center for Law and Justice, which worked on these cases.