Statement from the family and friends of Dr Mudawi Ibrahim

He was arrested along with his driver Adam Elsheikh, on Wednesday 07/12/2016, and both were taken to an unknown location. Then he was transferred to Kober prison were he remained there until now. The family was allowed to visit him only twice throughout his detention, and these visits took place 50 days after his arrest.

During visits, Dr Mudawi looked clearly exhausted from the hunger strike he initiated in the 22 to 29 of January 2017. The family made efforts to convince him to break the strike and give a chance to the efforts of his brothers, friends & acquaintances that care about him for his release to present him to a public trial. He was convicted to break the strike but however all these efforts failed.

After the failure of these efforts he has started a second hunger strike from Thursday, 02/02/2017 that is continuing until today, Saturday 11/02/2017. In protest for being thrown in Kober prison for all this period and only investigated with twice immediately after the arrest. He stated that as a prisoner he has no weapon apart from the hunger strike until released or tried according to the State laws.

The family has already followed all the possible legal methods, contacted several authorities and individuals to work on the release of Dr Mudawi Ibrahim, Nora Obeid and Adam Elsheikh. We also peacefully protested in front of Kobar prison, NISS office and Ministry of justice. Plus through the lawyer Salwa Absham we filed 4 legal memoranda on 31/01/2017 to the ministry of justice and the public prosecutor requesting a visit to the detainee Mudawi Ibrahim to ensure compliance with detention regulations according to Article 51, paragraph 8 of the Intelligence and Security Act and second of the NISS legal department. Also to inform that the detainee is on a hunger strike.
A third memorandum was filed at the Human Rights Commission and fourth to the National Council of the Committee on Legislation and Justice and Human Rights.

All these memoranda were filed in the name of the 3 detainees, Mudawi Ibrahim, Nora Obeid and Adam Elsheikh and none of these authorities replied.

On Thursday, 09/02/2017, the family was contacted by NISS and was given permission to see Dr Mudawi. We found him in bad shape, thin and fragile with his health deteriorating. More insistent to continue his hunger strike even though some of us tried to persuade him. He sees this as his only weapon inside detention. He informed us he was only visited by a doctor once, only measuring his blood pressure, during the week long hunger strike. The doctor informed him that he has low blood pressure.
Subsequently, the lawyer Salwa Absam on behalf of the family filed a petition to the Minister of Justice and NISS legal department stating that according to the health conditions of the detainee and the hunger strike, to allow him to be seen by his doctor.

To be noted that a charge of attempted suicide, article 131, was filed against Dr Mudawi by NISS at the ministry of justice.

We, the family, friends and acquaintances of Dr Mudawi, would like to inform the general public of these facts and updates. We also demand the governmental and judicial apparatus to release Dr Mudawi or put him on public trial immediately.
We hold NISS fully accountable for any harm he encounters. 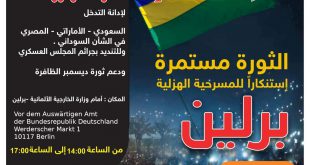 Statement of the Chair: