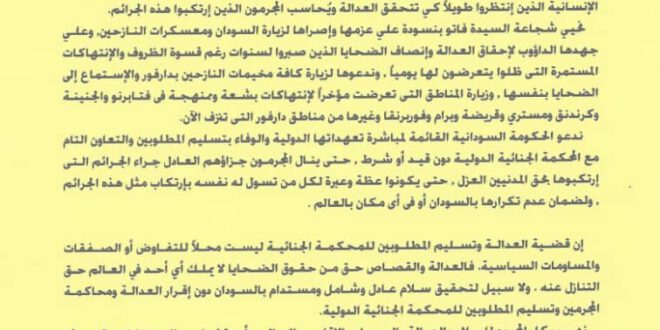 ■The collective civil and self – defense forces leadership of the Sudan Liberation Movement/ Army chaired by Abdul Wahid Mohammed Ahmed Al – Nour, highly welcome the visit of Chief Prosecutor of the International Criminal Court (ICC) Mrs. Fatou Bensouda to Sudan. However; this unprecedented visit will give a glimmer of hope to the millions of victims, who were subjected to ongoing State – sponsored genocide, ethnic cleansing, war crimes and crimes against humanity, and waited for so long inside their death camps in inhumane conditions, united in their common suffering to see justice and accountability being done against their perpetrators.

■The Sudan Liberation Movement/ Army salute Mrs. Fatou Bensouda’s courage, unwavering commitment and above all the relentless determination and efforts to achieve justice for the victims so that their hearts be in rest and therefore, the movement  solemnly call upon her  to visit the Internally Displaced People ‘s ( IDPs) camps of  Darfur in order to listen to the voice of the victims as well as visiting areas which recently witnessed infliction of systematic and regular lethal violence against armless civilians in Fatta Bornou, Al Geneina, Kirinding, Mastari, Gereida, Buram and Furo Baraga that until writing this statement is bleeding. The continuation of the ongoing genocide, fresh exodus of wretched civilian population running for their lives in Darfur, unequivocally illustrate that, the blood stained reality of Darfur remains unchanged.

■And as Bensouda carries out her inspection tour to see the evidences of new genocide, war crimes and crimes against humanity which is impossible to ignore, the Sudan Liberation Movement/ Army  call upon the Transitional Government of Sudan to honor its international obligations and fully cooperate with the ICC and not to delay the extradition of the deposed president Al Bashir and the rest of  perpetrators to stand trial at the Hague , in order to avoid repetition of these crimes in Sudan and elsewhere in the world.

■The issue of justice and surrendering of the perpetrators to the ICC is not subject to negotiations, bargaining or political compromise as justice and retribution are merely the right of the victims. Moreover; we expect a multitude of as richly deserved fresh indictments to be issued by the ICC against all those implicated in the new wave of genocidal killings and extermination and this must include persecution for command responsibility and direct physical participation in all the offenses and crimes committed in Darfur, if there is no justice there can be no peace and justice has no substitute.

■Finally; the International Criminal Court’s Chief Prosecutor  Bensouda has the fully support of Sudan Liberation Movement/ Army that gains its legitimacy, mission and reason de’etre exclusively from the victims longing for justice that has for too long been denied to them.

Previous The European Union regrets the unwarranted violence against peaceful protestors in Khartoum last night,
Next The United States Embassy marks the second anniversary of the violent dispersal of demonstrators in Khartoum on June 3, 2019