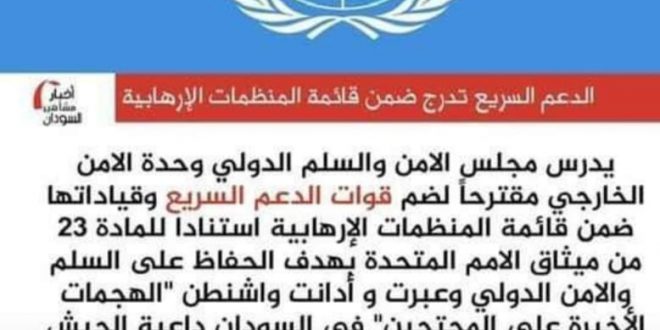 Her Excellency, Federica Mogherini
High Representative of the European Union
for Foreign Affairs and Security Policy

Subject: The situation in Sudan

Excellency,
We would like to inform you, Excellency, that we represent the Association of Sudanese at International Organizations (ASIO). The Association and its members are currently working hand-in-hand with the Forces for Freedom and Change (FFC) at the frontline of the battle against human rights abuses perpetrated by the Transitional Military Council (TMC) in Sudan, and its allied armed Militias, particularly the Janjaweed – albeit the participation of “shadow Militias”, Popular Defence Force and National Intelligence and Internal Security Service Militias cannot be excluded.

We write to you to express our deep concern about the current situation in Sudan, as the Janjaweed militia, which committed crimes against humanity in Darfur, is currently perpetrating similar atrocities in Khartoum and other cities against thousands of defenceless protesters, who are calling for freedom, peace, social justice, respect for human rights and restoration of democracy.  Since the armed attack by the TMC forces against thousands of peaceful protesters on Monday 3 June 2019, Excellency, the situation has deteriorated further as a result of a significant increase of enforced disappearances, arbitrary arrests of peaceful protestors and political personalities, and the continuation of the targeting of civilians, including women and youth and human rights defenders.  Since then, the Internet has been shut down in an attempt by the TMC to silence dissent, destabilize the organization of further protests and prevent the airing of ongoing atrocities. These heinous crimes committed by the TMC are unprecedented in the capital Khartoum.

Excellency, the position of the TMC and the armed Janjaweed militias in response to peaceful protests is steadily worsening. Indiscriminate killing, enforced disappearances, arrests, and torture continue to be the TMC’s response to peaceful protests. To date, credible sources cite a death toll of some 160 civilians and hundreds of arbitrary detentions, especially targeting peaceful protestors. On 3 June, alone, an unidentified number of protestors and corpses, according to eyewitnesses, were thrown into the River Nile in an area adjacent to the sit-in. In addition, medical staff witnessed the Janjaweed storming medical facilities and preventing doctors from administering first aid to the seriously injured. Notwithstanding, peaceful protestors, especially youth, have vowed to continue peacefully storming the streets of many cities and towns calling for freedom, peace and justice.

Whilst most segments of Sudanese society continue to take to the streets peacefully, TMC’s armed forces and Janjaweed militias continue to storm neighbourhoods and homes. Women, youth and men are at greater risk of mass killing, torture and enforced disappearance. There are genuine and serious concerns for the future of Sudan under the rule of the military junta.

Excellency, denial of freedom of expression, association, assembly and other gross violations of international law continue to systematically occur by the TMC.

Henceforth, Excellency, we kindly request the European Union to:

1. Issue a statement of a strong condemnation of the TMC and Janjaweed Militia for the on-going atrocities, repression, and the mass arbitrary arrests and killings, which continue to target civilians and peaceful protestors, including women and youth;

2. Urge the TMC for a rapid transfer of power to a civilian-led transitional authority, in line with the deadline set by the African Union, to lay the foundation for democracy in Sudan, as per the agreement reached earlier between the TMC and the Forces of Freedom and Change (FFC);

3. Immediate and unconditional release of all detainees who participated in the peaceful protests.

On Behalf of the Association of Sudanese at International Organizations (ASIO).