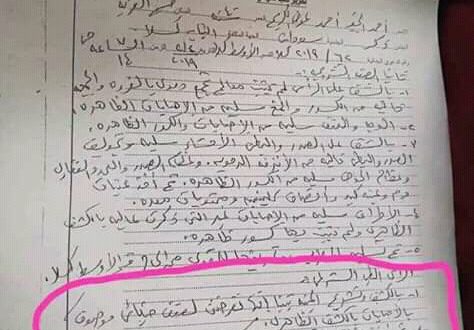 For the last 45 continuous days the people of The Sudan and for the second times within just a decade, took the streets of its major cities, towns and villages in protest against tyranny, corruption, mass killings, internal terrorism and marginalization and 30 years of extremely brutal Islamists dictatorship the people of the Sudan have ever endured and suffered in their country recent political history.

The protester, Ahmed al-Khair, was a 33-year-old school teacher who was arrested in his own house by the security officers who raided the house and detained on January 31 and pronounced dead in custody in the evening of February 1, 2019.

Mr. al-Khair was viciously tortured’ beaten with blunt objects on various parts of his body, repeatedly punched on the kidney area and violated and raped with sharp point object according to human rights activist in the Sudan. Eventually due to massive internal bleeding and organ failure Mr. al-Khair succumbed to his death as result of this Appling treatment and torture just two days after he was arrested.

Furthermore the government has repeatedly refuse to release the body the deceased, Mr. al-Khair to his family but with the mounting pressure from the

The deceased colleague and the masses who voluntarily and spontaneous gathered to attend his funeral pay their respect the hospital authority eventually released the body the deceased to his family for proper burial and mourn their loss in peace.

We the undersigned certified teachers in Manitoba, appeal to your collective consciousness to strongly condemn the killing of innocent protestors and torture of freedom activists in the Sudan and we shall pray with his family and ask for justice for Mr. Ahmed al-Khair who was an ordinary citizen and a teacher just like any one of us and was only advocating for peace, tolerance and right of education.

We as teachers share universal values of peace, tolerance and respect for basic human rights of right to life. Let us uphold our belief in it and by at least raising our voice and. Sadly Mr. Ahmed paid the ultimate price for a noble cause.