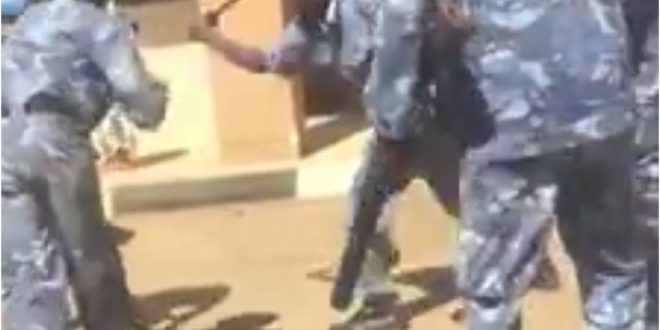 Our First Glimpse of How Khartoum Intends to Respond to Organized, Peaceful Demonstrations Over Catastrophic Price Hikes

Today’s scheduled and pre-announced demonstration in Khartoum, protesting catastrophic increases in the prices of basic commodities, including food and medicine, saw the National Islamic Front/National Congress Party unleash a fury of baton-wielding policemen, inflicting serious injuries it would appear from the video now circulating widely on Sudanese social media. (Notably, since similar protests in September 2013, Sudanese activists have been much more skilled and fluent in the use if various social media, helped in part by advances in mobile phone technologies readily available.)

The demonstrations of September 2013 were quelled only when the regime gave “shoot to kill” orders to police and security forces, a fact established by both Amnesty International and the African Centre of Justice and Peace Studies. In the end, at least 200 people were killed in this brutal response—many more according to some reports (the demonstrations were spread widely across Sudan).

Present massive price increases are much more severe than in September 2013, and the effect on the lives of ordinary Sudanese is much more profound.

The international community has reported almost nothing of the economic and political developments leading to today’s demonstration, giving an implicit “green light” to the NIF/NCP regime. News reporting by non-Sudanese news organizations has been almost non-existent, with the notable exception of Al Jazeera | http://sudanreeves.org/2018/01/10/8407/.

If protests continue, as seems inevitable, the Khartoum regime will not—without intense international pressure—refrain from again issuing “shoot to kill” orders. This will be blood on the hands of an acquiescent, expedient, and morally cowardly international community.

Videos circulating on social media or sent to Radio Dabanga show the use of force by Khartoum’s riot police against peaceful demonstrators in the street. The demonstrators in the videos are marching or chanting slogans against the recent price increases following the implementation of the new annual budget. In the first video, a man is beaten by riot police with batons.