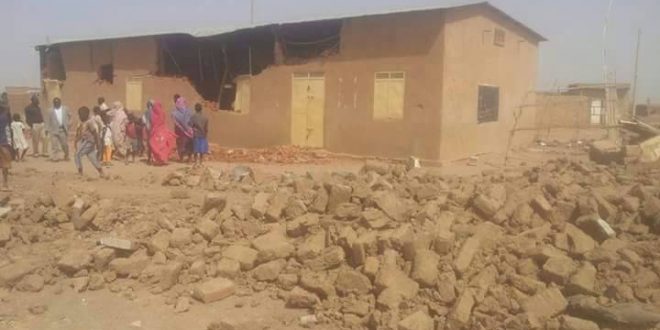 ▪Save Christians in Sudan from Persecution by the Sudanese Islamic Extremist Government.

▪Stop the Sudanese Government from Eradicating Christianity & the Deeply Rooted Church in Sudan.

▪Support the Right of Freedom of Worship & Religious Diversity in Sudan.

Following the demolition of Soba Al-Aradi Church on Sunday, May 7, 2017 the Solidarity Campaign learned details of what had transpired during the overwhelming demolition of the only remaining Church in the area located South of the Capital Khartoum.

On Sunday afternoon around 2:00 PM, Khartoum State security forces from the Governmental Land Protection Apparatus which operates under the Ministry of Urban Development & Planning accompanied by large numbers of members of the National Intelligence & Security Services, as well as members of Riot Police stormed into the area of Soba Al-Aradi South of Khartoum block number 7 in which the Soba Sudanese Church of Christ is located.  They immediately embarked on demolishing the Church without notice & tore down its walls.  They destroyed the walls completely and damaged a prayer hall along with two offices that belong to Youth and Women.  Also they destroyed a placed specified for Children for Sunday School and other activities.

Obviously the act of destroying the Church on Sunday was carefully planned considering the symbolism of Sunday to faithful Church followers, since it is a majour prayer day for the Congregation on which important Church programs related to Women, Youth and Children are held.  Witnesses of the event described the amount of hatred expressed by the authority manifested in actions and manners of members of forces who excuted the criminal assignment.

The Sudanese authorities  carried out the act of the Church demolition without a slight consideration to the sacredness or sanctity of places of worship.  They premeditately and blatantly violated the constitutional rights of the Church and that of its members, yet they violated international agreements and human rights provisions.  Having no remorse or thempathy towards christains, the intelligence and Riot Police units arrested two church members, civil engineer Mr. Bolis Salah and Mr. Nagi Abdalla who were nearby watching the demolition in disbelief.  At first they were asked to stop filming the incident, then they were told to unlock church doors and remove items within the premises, but Bolis and Nagi refused, because the Church admistsion weren’t present at the time.  Therefore they were taken to the National Intelligence & Security Services’ headquarters where they were questioned, subsequently   released after two hours.

It is worth mentioning that the authorities have Demolished 12 Churches in Soba area prior to demolition of the only remaining church in the area on Sunday, May 7, 2017.  The Sudanese Government managed to destroy the 12 churches in Soba area in the period between (2011-2015), which was part of well- orchestrated plans against existence of the Church and Christian faith in Sudan.  The Security officials told a small number of gathered Church crowd during demolition that the reason they demolished the Church was because the Church was a source of disturbance to an adjacent Mosque, however their claim wasn’t true.

Regrettably the demolished Church of Christ in Soba Al-Aradi accommodated prayers and other related programs of three denominations of Christains, as it was the only available Church before it was gotten rid of.  As you can see in the photos onset that members of the Church have no place for prayers after destruction of their Church.

Previous The Genocide Insider
Next *In His First Visit Abroad, will the President of the United States Meet the Only Incumbent President Wanted by the ICC*

🔴Statement from Sudan Liberation Movement/ Army concerning the allegations of UNAMID head of mission in Darfur.

Share this on WhatsAppOf all the Northern intellectuals, Dr Mansour Khalid stood as a pinnacle …